Different, But Not Different Good 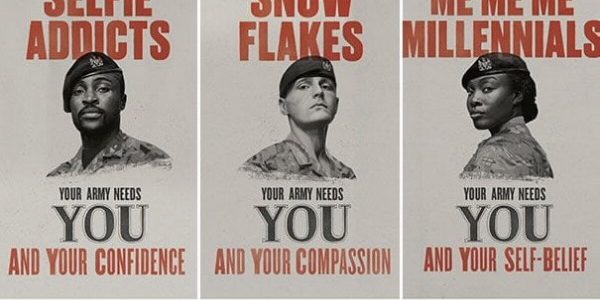 We all get why delivering communication content framed within an engaging idea will make that communication more interesting, memorable and ultimately effective.

The interesting debate has always been around what constitutes an engaging idea.

A couple of recent campaigns have received a lot of coverage with some pretty polarised opinions and some commentators asking us not to be too harsh on teams, agencies and clients who “try to push the creative boat out.”

We’re all for brave at Brand Edge- but bravery surely should be accountable on some level, whether it be commercially or insight based?

There were a couple of campaigns that we find particularly problematic, not least because we can’t imagine they were subject to the rigour of good research

The first is the Army recruitment campaign targeting Millennials and Gen Z. Do potential recruits use language like “snowflakes” and “millennials”? we doubt it.

And even if they did, would they not be turned off by the pejorative overtones of some of the headlines?

Beyond this, we don’t buy that “selfie addicts” are all confident.

We think they’re more likely to be insecure or narcissistic.

And it simply isn’t the case that snowflake tendencies and compassion go hand in hand.

Without going overboard on the implications of the thinking, do we really want our security to be placed in the hands of a group of people more interested in pouting than protecting?

The second is the HSBC campaign

What’s the TV meant to be doing? Apparently, according to the trade rags, it’s meant to celebrate HSBC’s global heritage and highlight Britain’s hidden internationalism.

Apparently, we’re an island but we’re part of something bigger?

Even if your average man on the street could work out what the “what” was, what gives HSBC the right to claim any of it?

What’s the “bigger” thing we’re part of and how on earth is it helping us to “thrive together”?

The local executions are just as annoying… patronising attempts to ingratiate with the locals. And from a bank that’s closed hundreds of branches in the last few years, leaving many local towns bankless.

We get that banks have to be efficient and aren’t charities but don’t churn out this sort of nonsense to rub peoples’ noses in the mess you’ve helped create.

A massive, global bank appropriating local culture in such a crass way stinks.

We can’t imagine this campaign was subject to any research amongst real people – as what we see is an increasing level of cynicism and a forensic evaluation of intent and content.

At Brand Edge we pride ourselves on thorough research before bringing a new ad treatment to market utilising our proprietary creative testing methodology called TRACTIONTM.